Music and the environmental movement

About the Author: Stefan Joubert

Stefan Joubert is the manager of the London Singing Institute. He is passionate about helping adults find their voice. He truly believes that no one is too old or not talented enough to start singing. To get started with your singing lessons contact Stefan at enrol@londonsinginginstitute.co.uk

The increasing number of consumers and industries are turning the conversation towards sustainability, in light of climate change and environmental disasters.

As we enjoy listening to our favourite artists and being entertained by stunning live shows, we often forget the impacts these activities have on our planet.

Touring, in particular, can be incredibly taxing on the environment, due to the number of crew members, planes, private jets, tour buses and trucks being utilised.

Not to mention, the large number of crowds travelling by car to see their idols perform.

Luckily, several artists have started meaningful conversations about the impacts of touring on our climate and some have taken pioneering action to keep not only their fans but also the planet happy.

In this article, we explore the exciting new direction musicians have taken and the potential ways that everyone can make touring environmentally friendly.

We will also look at music playback, the resurgence of vinyl and the, often overlooked, environmental cost of streaming to provide an all-encompassing picture on music and the environment.

Why Coldplay have refused to tour – should you?

At the end of 2019, Coldplay made the surprising and somewhat polarising announcement that they will stop touring until they can figure out how to make their live shows not only sustainable but actively beneficial for the environment.

While their initiative is commendable, it’s worth noting, however, that Coldplay is in a position where they can afford to do this.

Other, smaller artists, who make most of their income from touring and live shows, would have to reach a considerable number of streams and maximise other income sources to make up for withholding live shows.

Touring on such a large scale as Coldplay is also very different from hiring a van for your local band and doing a few shows up and down the country.

They travelled to five continents playing 122 shows to 5.4 million people and, consequently, The Head Full of Dreams tour made a whopping $523 million.

Having said that, we hope to see more large-scale artists encouraging a conversation surrounding music and environmentalism and it’s exciting to see the innovative action that Coldplay will take.

Although Coldplay made news headlines with their decision, other artists have already been implementing environment-friendly changes into their live shows.

Another large-scale band, The 1975 have been making a difference in live music and sustainability.

Their Finsbury Park show, on 11th of July 2020, will be the first one in the UK to be powered by Hydrotreated Vegetable Oil, a form of renewable diesel.

It will also utilise hybrid-powered generators with a collection of solar panels.

The concert will be the first paperless show, with all tickets to be offered in a digital format, while the show organisers, Festival Republic, have pledged to plant 1,975 trees across the surrounding boroughs of Finsbury Park.

The sustainable action of The 1975 doesn’t stop there.

They have also encouraged fans to bring old band t-shirts to be printed with new designs, instead of creating new merchandise.

If you get hungry at the gig, food vendors will have a traffic light system showing the environmental impact of your meal.

It’s unsurprising that the band have taken such a progressive, environmentally conscious direction with their shows.

They are known fans of activist Greta Thunberg, who has written a 5-minute essay to be featured on The 1975’s upcoming album, Notes on a Conditional Form, set to release April 24th 2020. 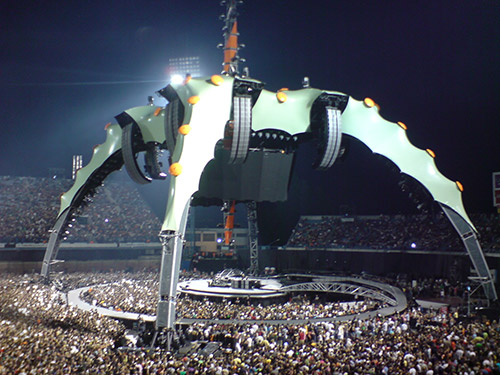 U2 retracting the claw

When it comes to most extreme ‘environmental costs’ in the form of touring, U2’s claw springs to mind.

In 2009, the monumental design allowed the band to play in the middle of the audience, but was it worth it?

The structure required 120 trucks to move it around, reportedly generating the equivalent carbon footprint of a return flight to Mars, from their 44 shows that year.

Since then, the band have made changes to reduce their carbon footprint, from using hydrogen fuel cells to recycling guitar strings.

Other bands follow the music and the environmental movement, with Radiohead using LEDs instead of spotlights, for example.

Massive Attack has taken it a step further by collaborating with a team of researchers who will analyse the environmental impacts of touring and look at ways to reduce their carbon footprint.

But the Bristol-hailing band has no intention to kick their heels in the meantime – they have pledged to tour Europe by train and have previously performed at Extinction Rebellion protest in London to show their support for environmental activism.

While the impacts of tour buses, trucks, flights and energy consumption of live music are apparent, listening to music at home poses some hidden environmental risks too.

Although our streaming and downloading habits have reduced the use of plastic, the recent resurgence of vinyl means that, once again, music is being made in physical format from, potentially, harmful materials.

We love the vintage sound, look and feel of LPs, but, unfortunately, they’re made from a material called polyvinyl chloride, or PVC.

PVC is known to contain carcinogenic chemicals and its production often results in toxic wastewater that is known to be introduced into rivers.

Just as vinyl is a resurgent relic from the 20th Century, its production remains largely unchanged today, posing a considerable environmental impact.

But, does streaming make you a more environmentally conscious music fan?

Digital products might seem virtual, but they have to be stored somewhere, consequently relying on infrastructures of data processing, transmission and storage, potentially creating more greenhouse gasses than the production of physical products.

When you add the production of computers, phones, tablets, headphones and speakers that are used to stream and listen to music, the impact is even greater.

New solutions are emerging with companies in Holland looking at ways to make vinyl greener, however, their initial prototype has been rejected by the conservative community of vinyl lovers, based on sound and differing feel.

It’ll be interesting to see if greener vinyls will enter production in the future though, and how the greenhouse gasses caused by streaming can be reduced.

What can you do?

If you’re an environmentally conscious music lover or musician, you may feel that you’d like to contribute to reducing the carbon footprint of live shows and recorded music.

It can be difficult to know where to start and it’s daunting if you don’t have the influence that bigger artists do, but there are some simple ways you can make a difference.

If you’re a musician or a band, consider travelling to shows by train, carpooling together and encourage fans to do the same.

Merchandise can be a great way for you to earn money, but it doesn’t always have to compromise sustainability.

Choose t-shirts that are manufactured ethically, by companies that are committed to reducing their environmental impact.

Encourage fans to recycle their t-shirts, if this is something you can implement.

As a music maker or music lover, choose refurbished and second-hand tech, to reduce the demand for new gadgets and prevent older ones from ending up in the landfill after, quite often, very little use.

There are plenty of second-hand vinyl stores in the UK and around the world, with records that still have a lot of life left in them.

Remember that simple solutions like bringing your own water bottle, Tupperware, refillable cup to a music event or festival can go a long way.

Always clean up any rubbish and ensure it ends up in the bin or recycling.

Try to use digital tickets if you can.

Looking at the devastating effects of climate change can be very daunting and make you feel powerless as an average consumer or independent musician.

These simple steps will help you have some control over your carbon footprint and make music enjoyable, not only for yourself and others but also the planet we all share.

Tags: Environment, Music and the environment

Expert tuition in the comfort of your own home

Exclusive vocal instruction for adults of all ages and abilities (absolute beginners are very welcome!)

View our singing courses
Tags: Environment, Music and the environment